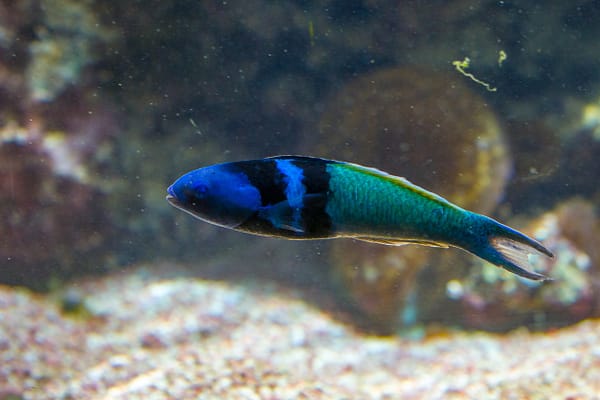 The Bluehead Wrasse’s diet should include vitamin-rich mysis shrimp frozen and vitamin-enriched brine shrimp frozen, and other meaty food items, in addition to the highest quality seafood flake, and marine pellets.

The Bluehead Wrasse is a stunning and multicolored wrasse. It also displays dramatic color variation among individuals according to gender and age. It is easy to keep and has a longer time within the tank. Because of their stunning color, the Bluehead Wrasse fish are a wonderful accessory to an aquarium. Juvenile Bluehead Wrasse usually has a yellowish hue with black markings on their sides, and occasionally around their fins. In adulthood male Bluehead Wrasse features a bold stripe pattern. It displays territorial behavior and snares new fish into the aquarium. It is therefore the last fish added to the aquarium. Because it is a carnivore, they can eat invertebrates and crustaceans but not macroalgae and corals. This is why it is considered reef-safe, but be cautious. If they are scared the Bluehead Wrasse will hide within the rockwork or might bury themselves within the sand. It is able to coexist with tankmates well and will eat any of the prepared meals that are offered to them. The Bluehead Wrasse is striking in colors and, when it moves through the water with grace is sure to draw everyone’s interest in your aquarium. It is an exquisite fish that excels in jumping, so it is recommended that you keep your Bluehead in a locked aquarium to prevent them from leaving the tank. The adult Bluehead Wrasse has distinct colors when opposed to juvenile. When they reach the age of adulthood, Bluehead Wrasse fish become extremely aggressive and territorial in the wild. Breeding has not yet been achieved in captivity. We suggest keeping a few live rock and a sand bed in your aquarium so that it feels at ease.