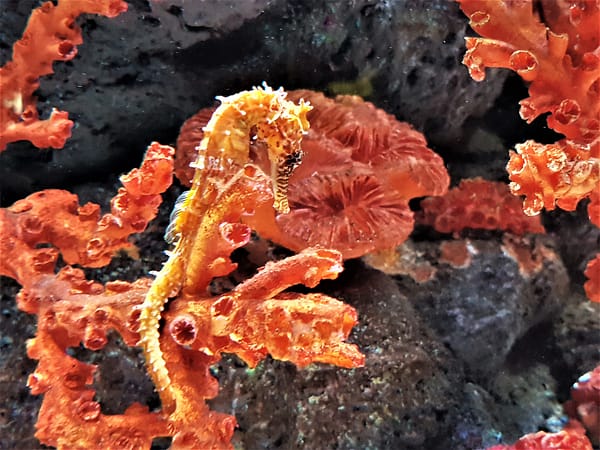 Captive-Bred Barbouri Seahorse is highly popular with enthusiasts since it exemplifies beautifully what is considered to be the “classic” seahorse look. The pronounced spines, the striking zebra stripes on the snout, as well as the distinctive five-point “crown” are just a few of the stunning beauty of these stunning seahorses.

They thrive when they are kept as a mated pair or in small groups in a single species aquarium. A 30 gallon tank can be enough for a single pair. You can add 10 gallons to the size of the aquarium to accommodate each pair. Spray bars can be used to provide a gentle flow, as well as eliminate stagnant areas from the aquarium. Seahorses aren’t very strong swimmers and prefer to utilize their prehensile tails to connect to branches of live rock algae, or even artificial decorations.

Seahorses are less prone to contract Vibrio bacteria-related infections if the temperature isn’t allowed to go over 74 degrees Fahrenheit. This is especially important in the case of aquariums that contain different species of Syngnathids. It is also important to get rid of waste and unfinished food every day. The levels of calcium and alkalinity must be checked and maintained in the order in order to keep their bony plates well-maintained.

They can be kept in conjunction with smaller timid fish like small pipefish, gobies, dragonets, and firefish. However, territorial, aggressive or swift-moving fish do not work well with other fish.

Seahorses may be injured by anemones, corals that have tentacles that sting, or corals that can be large enough to eat them, like brain corals. Although sea fan, Acropora corals as well as other branching corals are safe for seahorses. However, they may be damaged due to a seahorse that continuously tacks to them. Crabs and clams can pierce the seahorse, causing a cut that can lead to secondary infections. Small ornamental crustaceans could be consumed by seahorses.

Beware of tank mates that compete with the seahorse in search of food. Seahorses that are captive-bred are used to eating frozen Mysis shrimp, which makes an excellent alternative to wild-caught counterparts. They also feed on amphipods as well as other crustaceans that live in rock. They will also take adult brine shrimp with vitamin enrichment but it shouldn’t be the mainstay portion of their food. They are slow and deliberate feeders and will prefer two or three smaller meals per day.

Seahorses are perhaps the most well-known fish around due to their distinctive appearance and behavior. They are very social and curious fish and are fascinating to observe as you watch them interact with your environment as well as with each other and even with their owners.

This Barbouri Seahorse is highly desirable by enthusiasts because it amazingly illustrates an “classic” seahorse look. The pronounced spines, the striking zebra stripes on the snout and an enticing five-point “crown” contribute to the stunning beauty of these beautiful seahorses.

They thrive when they are kept as an mated pair or small groups in an aquarium that is exclusively for species. A 30 gallon tank can be enough for a single pair. Increase the 10 gallons dimensions of the aquarium for each pair. Spray bars can be utilized to allow for gentle flow as well as eliminate stagnant areas from the aquarium. Seahorses aren’t very strong swimmers and prefer to utilize their prehensile tails attach to live rock branches algae, artificial decorations.