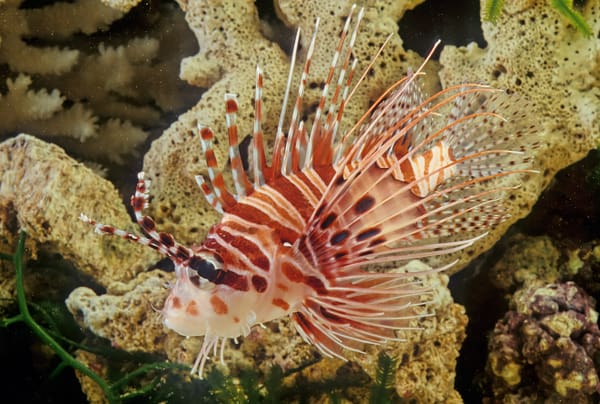 The Antennata Lionfish, also known as the Ragged-finned Fish also known as Spotfin Lionfish, has red black, white, and vertical stripes that run along the body. Its most distinctive feature is its fan-shaped, large pectoral fins, as well as the long dorsal fins. They are quill-like and with no connective tissue, which gives them a spiny appearance.

When first introduced into the aquarium, live saltwater feeder shrimp are utilized to lure the fish to consume. After acclimating to the diet, it should include meaty food like living shrimp (including ornamental shrimp) as well as live fish and, sometimes crustacean flesh.

The Antennata Lionfish has red, white with black horizontal stripes on the body. Its most distinctive characteristic is its huge pectoral fins that resemble fan-shaped and long dorsal fins and venomous spines. They are without connective tissue, giving them a spiny appearance. An aquarium of medium size with lots of hiding spots is ideal. It will hide when it is adjusting to its new surroundings and needs to be supplied with an adequate supply of ghost shrimp.