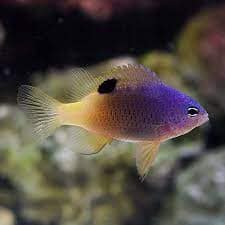 The Tracey’s Damselfish has created an uproar in the world of collectors, aficionados, and enthusiasts who love rare and gorgeous fish. It is a relatively new addition to the aquarium hobby. Tracey’s Damselfish is not as well-known as other damselfish species in the aquarium industry, but it creates a lasting impression due to its stunning and distinctive coloration.

This stunning Damselfish has an exciting combination of purple and yellow which accentuates the upper portion of the fish. The warm orange and pink coloration like a sunset perfectly accents the dominant yellow and purple coloration for a stunning effect.

Like other Damselfish, the Tracey’s Damselfish requires a 30-gallon or bigger aquarium that has plenty of hiding spots. Although Tracey’s Damselfish will be more likely to avoid the other species of fish and invertebrates or corals, a few may be territorial toward its own species or similar-sized fish. Maintain the Tracey’s damselfish in small groups of oddly-numbered fish in appropriate-sized systems for an impressive display.

Give your Tracey’s Damselfish assortment of meaty food items such as frozen mysis and brine shrimp. You can also give it herbivore recipes and flaked food items.

Tracey’s Damselfish (Chrysiptera traceyi) is often seen singly or in pairs in seaward reefs throughout the Indo-Pacific. The frontal section of the fish is either purple or blue and fades into yellow or bronze toward the caudal fin, with one black spot beneath their dorsal. They can grow to a maximum of 3 inches, and consume a wide diverse diet, which includes mysis, krill, and seaweed. Like the majority of damselfish, they could be a bit aggressive with other tank mates. They are great in tanks with at least 30 gallons and ample live rocks for them to hide among.