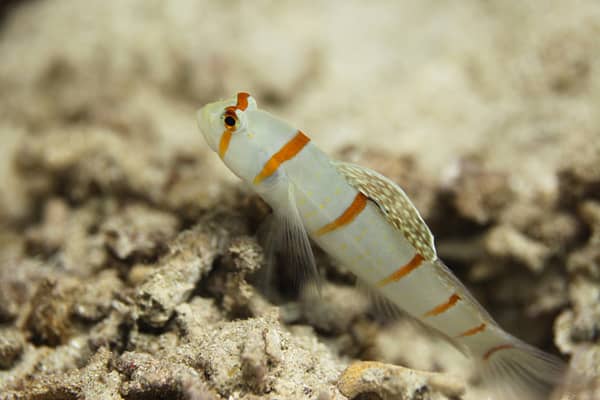 The Orange Stripe Prawn Goby, sometimes referred to by the name Randall’s Shrimp Goby, was first discovered in the Western Pacific in 1978 by Hoese and Steene. Their body is white, with orange stripes. There is an orange stripe around the eyes and across its entire head. Males can be distinguished by the dorsal fin, which resembles a fan, which has a striking eyespot. It needs an aquarium that is 10 gallons or more. It is a calm fish, however it can be a bit agitated with its companions when they are kept together or the tank isn’t big enough. When it is first introduced to an aquarium, it will not eat for a while and then will acclimatize and begin to eat. It’s not aggressive toward other shrimp gobies and could be able to share its burrow species.

It is feasible for the Orange Stripe Prawn Goby to reproduce successfully in an aquarium. They can also develop an symbiotic partnership with any other pistol shrimp.

The diet should comprise of mysis shrimp of various varieties and vitamin enriched brine shrimp and table shrimp chopped. It should be fed at least two times every day.

Its body is white, with orange spots that are outlined in brown. It is able to establish symbiotic alliances with nearly blind Alpheid shrimp. It is able to keep an eye as the shrimp digs a burrow to allow them to share. It’s ideal for aquariums that have plenty of hiding spots and plenty of swimming space. The aquarium must have a secure lid to stop it from jumping out. This Orange Spotted Goby adapts well to reef aquariums. However, it could pose a danger to tiny, delicate decorative shrimp. It favors the bed of fine sand as well as loose coral rubbles to sift through. It is possible for Orange Spotted Goby to spawn successfully in aquariums.