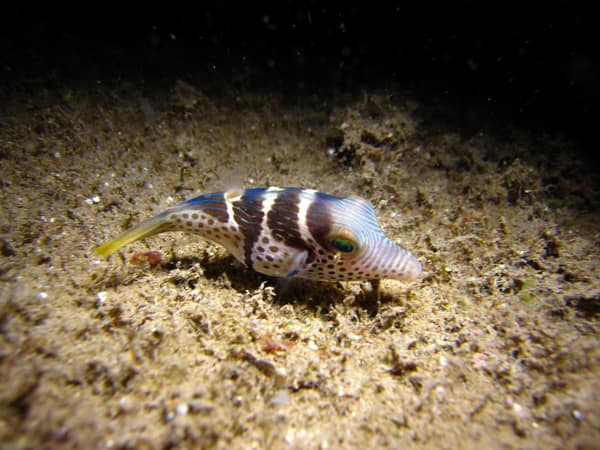 Mimic Saddle Puffer is an eel that has evolved the shape of its body and colors in order to make fun and appearance of the Valentini Puffer. In a similar fashion to puffers, they look like they are predators and would be a sour meal for others. They have a fascinating appearance, with dark brown bands along the middle, brownish-orange spotting on the lower portion as well as yellow fins, and blue stripes running down the back. They do not have pelvic fins however, it has learned to use pectoral fins for moving around the aquarium. It is easy to distinguish between these fish and the puffer because they mimic the dorsal spinal spine. A filefish’s dorsal has 2 spinal spines while the puffer has just one.

It’s rarely aggressive with other fish, except for those belonging to its own genus. It is ideal to a 30 gallons or larger tank which does not contain invertebrates.

The food plan should comprise various shredded shrimp, squid, mysis shrimp, scallop and freeze-dried krill that has been with a vitamin supplement as well as freezing marine algae. The diet should be fed no less than three times a day.

Approximate Size of Purchase 1″ to 2″

Why? to protect itself from predators.

Pufferfish can be poisonous due to tetrodotoxin found in their skin as well as other tissues of the body. They are poisonous to a variety of species of fish, so because they look like pufferfish, and act exactly like one, the fake saddle filefish will keep predators away from seeking to consume the creatures. The Mimic Filefish is not poisonous.

They not only appear like puffers, but they are also similar to them. They live in the same water and even shoal with the genuine Valentine Puffers.