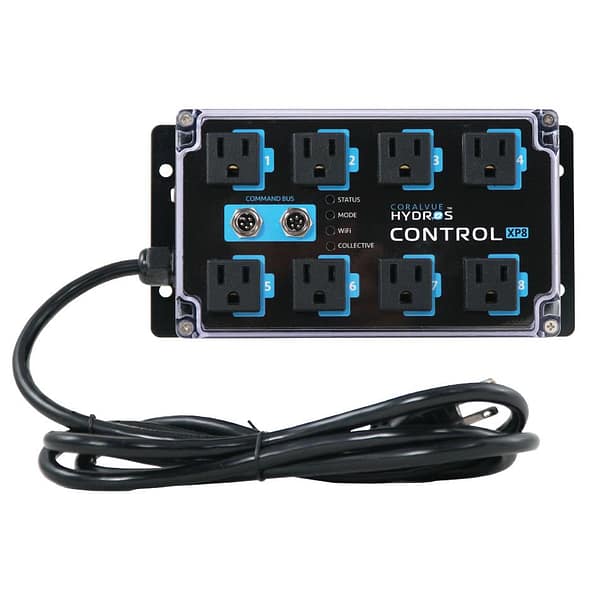 Full HYDROS Controller with eight controllable AC power outlets each with individual power monitoring capabilities to safely manage aquarium equipment that is critical to the life of the system.  This is for the Controller only but HYDROS PRO packs are also available.

Please note: CONTROL XP8 ONLY – Nothing else is included.

The HYDROS Control XP8 is an eight outlet (120V AC) energy bar and controller hybrid specifically designed for equipment like heaters and return pumps which are critical to the life support of any aquarium system. Each of the individually controlled outlets is built into the HYDROS controller for the highest level of security. The Control XP8 has a built-in 60W universal voltage Meanwell power supply with a 14amp max power capacity and is designed to pass ETL/UL certification.  Besides the clicking on and off of the controlled outlets, the XP8 is completely passively cooled and with its isolated power circuitry, the controller runs completely silent. Best of all, each of the eight outlets has individual power monitoring capabilities.

Besides being an overbuilt power strip, the Control XP8 is also a fully functioning HYDROS system controller capable of taking over intelligent decisions based on the status of other HYDROS Devices within the Collective. The two HYDROS Command Bus ports on the XP8 allow for a wired connection to any other HYDROS controller to form a collective of all Controls in one for the ultimate failsafe system. Control and monitor your Control XP8 energy bar from anywhere in the world using the technologically advanced HYDROS cloud-based app. The Control XP8 also has the ability to monitor and control up to eight different HYDROS WiFi devices.

Features or the HYDROS Control XP8

Max Per Relay: 8A
Total Max Amperage: 14A

Up to 8 WiFi Devices

connect up to 8 WiFi devices for added modular control on additional equipment like lights, pumps, feeders, and more by simply adding a HYDROS WiFi Power Strip or HYDROS Smart Plug (both sold separately).