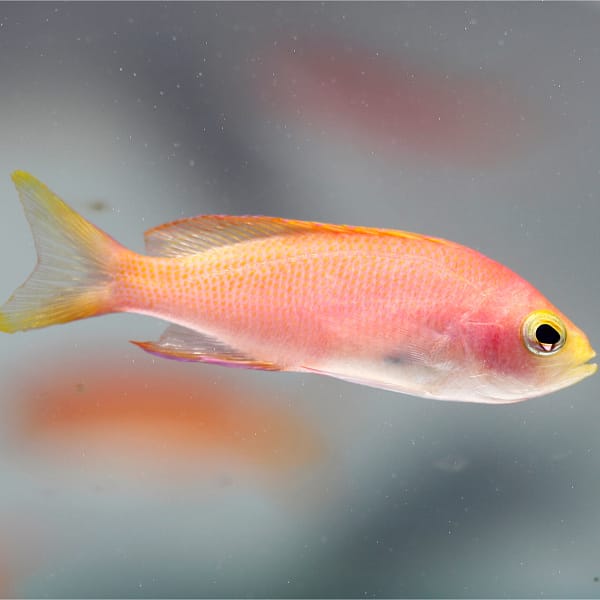 The Resplendent Anthias is also known as the Tierra Anthias or the Resplendent Goldie. One of the most common colors is a predominant yellow by red on the anal as well as caudal fins. Females’ body is mostly orange, with a pink/purple tint and yellow eyes dorsal and tail fin. Males are mostly orange with the same pink/purple hue, however, they have a transparent tail with the deep pink edges of the pectoral fins. The vibrant Anthias typically reside in the middle of the tank. However, they also require lots of caves, rocks, and other places to hide. While a 70-gallon tank can suffice for a single fish, if you are you are keeping a group with one male and multiple females, a larger 125-gallon and larger is recommended.
Anthias species share the feature that they are hermaphroditic. When a male who is dominant dies the biggest female in the group may change to take over its place.

After settling into a fresh aquarium Anthias thrive when being fed a variety of mysis shrimp frozen, enhanced brine shrimp frozen. Over time they can eat quality flake foods that are available in small amounts throughout the day. An attached refugium for the cultivation of amphipods and copepods will provide an ongoing supply of healthy fresh food that is sure to maintain the active planktivore levels.

The Resplendent Anthias, which is among the most popular color variants is mostly yellow with red accents on the caudal and anal fins. The female’s body is mostly orange, with a pink/purple hue, and an orange nose as well as a dorsal and tail fin. Males are predominantly orange and have the same pink/purple hue, however, they have a transparent tail and strong edged pink pectoral fins. They are incredibly colorful. Anthias tend to be in the middle of the tank, but they also require lots of caves and ledges, and other hiding spots. A medium-sized tank could suffice for one anthias, but for an entire group consisting of a male and females, a bigger tank is required. Anthias species share the characteristic of being hermaphroditic. When a male who is dominant dies the most dominant female in the group is likely to change to replace it.