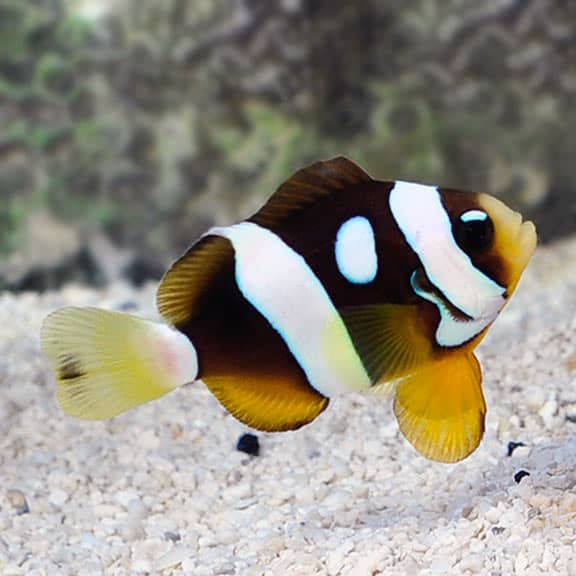 The Captive-Bred Galaxy Clarkii Clownfish is unique in its variation of the Clark’s Clownfish or Clarkii Anemonefish. This particular variation of Clarkii clownfish has a dark brown-black base color that has three white stripes and distinctive white spots on their bodies, with a yellow tail trimmed with white. Captive-Bred Premium Galaxy Clarkii Clownfish is the best name for the fish, with its fascinating patterns of broken white bars as well as spots of white. This fish belongs to the Pomacentridae family and is a great option for almost every saltwater aquarium.

The captive-bred fish have an unique benefit over species that are harvested wild because they’re generally robust and are more comfortable with conditions that are typical of the aquarium in the home. Thus, captive-bred fishes are the perfect choice for newbies as well as experienced aquarists.

The captive-bred galaxy Clarkii clownfish is easily bred within a saltwater aquarium. Females are the largest of the pair, and the two fish are usually close within the aquarium. Clownfish lay eggs and deposit them on flat surfaces and protect the eggs against other tankmates. The eggs usually hatch within 8 to 11 days, based on the temperature of the water. The fry should be raised in separate tanks eating a diet of rotifers, followed by baby brine shrimp.

This Clownfish is a ferocious eater. It is tolerant of meaty food items and frozen herbivore recipes.

This Galaxy Clarkii Clownfish is a distinct variation of the Clark’s Clownfish or Clarkii Anemonefish. This particular variation of Clarkii clownfish has a dark brown-black base color, with three white stripes, as well as a distinctive white spots on their body, with a yellow-colored tail that is edged with white. Premium Galaxy Clarkii Clownfish is the best name for the fish, with its fascinating patterns of white broken bars and spots.